For every smartphone owner, the worst nightmare is trying to boot up the phone and find that nothing happens. The phone won't turn on. A black screen with no sign of life spells disaster. Today, REWA LAB will share a repair case about fixing an iPhone X that won't turn on.

Step 1: Power up the motherboard for testing

Firstly, connect the motherboard with the power supply. Without triggering the boot-up, the current reading on the DC POWER SUPPLY is larger than the normal value. It can be judged that the main power supply line of the motherboard is short-circuited.

Run diode mode measurement of the J3200 pin 1. The diode value is 408, which means the main power supply line PP_BATT_VCC is normal. Then measure the J5700 pin 35. The diode value is 0, which means the main power supply line PP_VDD_MAIN is short-circuited. 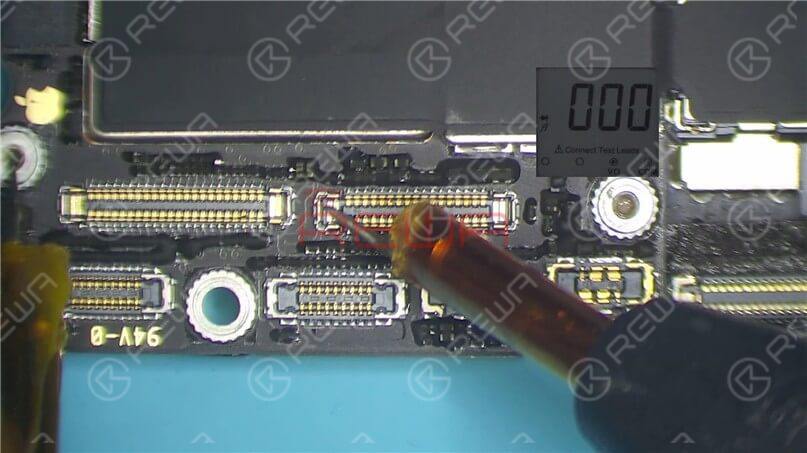 Since the PP_VDD_MAIN line simultaneously supplies power for the logic board and signal board, we need to separate the motherboard to identify the fault location.

Cut through the shielding paper with a sculpture knife and put the motherboard on the Heating Platform. 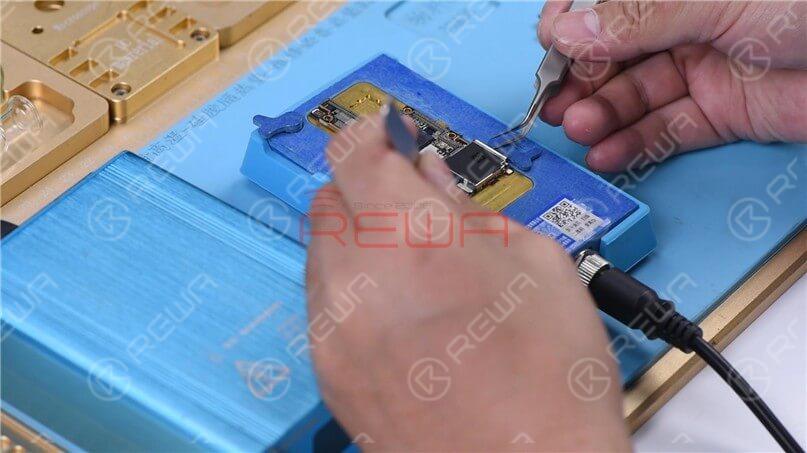 Run diode mode measurement of the J5700 pin 35 on the logic board. The diode value is 0. It indicates that the main power supply line PP_VDD_MAIN of the logic board is short-circuited. Through the diode mode measurement, it can be confirmed that the fault is on the logic board.

Step 5: Locate and clear the fault

Remove the thermal grease on the logic board.

Then we can locate the faulty component with rosin detecting. Smoke some rosin with the Soldering Iron at 365℃. Apply a 3V0 voltage to the S74 pin of the logic board. We can see that the rosin on C2990 has melted. It can be confirmed that C2990 has been damaged and needs to be removed. Measure the logic board again after it has cooled. The diode value returns to a normal value of 346. The fault is cleared. Smear rosin with Soldering Iron and solder-wick. Remove the tin on the bonding pad of the logic board and signal board separately. Clean the motherboard with PCB Cleaner. Remove excess thermal grease on the signal board with a sculpture knife.

Attach the signal board to the Reballing Platform and place the Reballing Stencil in position. Apply a layer of low-temperature Solder Paste evenly. Apply a small amount of Paste Flux. Align the logic board with the signal board and put it on the Heating Platform at 170 ℃.

When the temperature has risen to 170℃, continue heating for another minute. Install the motherboard on the phone after cooling it for 5 minutes.

Step 7: Boot up and test

Boot up and test. The phone turns on normally and the fault is eliminated.

iPhone X won't turn on and the motherboard experiences a large current without triggering the boot-up. By measuring the main power supply line on the motherboard with a multimeter, it was found that the PP_VDD_MAIN line is short-circuited. After separating the motherboard and a second measure, we confirmed that the fault was on the logic board. Through rosin detecting, C2990 was found damaged. Remove the C2990 and the fault was cleared.Feel free to visit our academy website for more repair content and our online shop for repair tools and parts.Or you can subscribe to our YouTube channel to get more phone repair information and techniques.