Compared with the iPhone 11 series, the motherboard separation of the iPhone 12 has become more difficult with different components structure. Today, REWA LAB will separate the iPhone 12 motherboard, demonstrating the separation and recombination operation process. This article will give you a comprehensive analysis of the structure and repair difficulties. 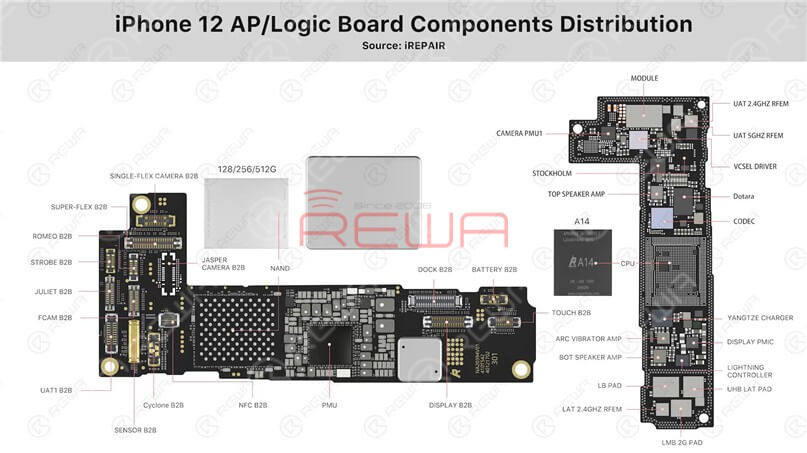 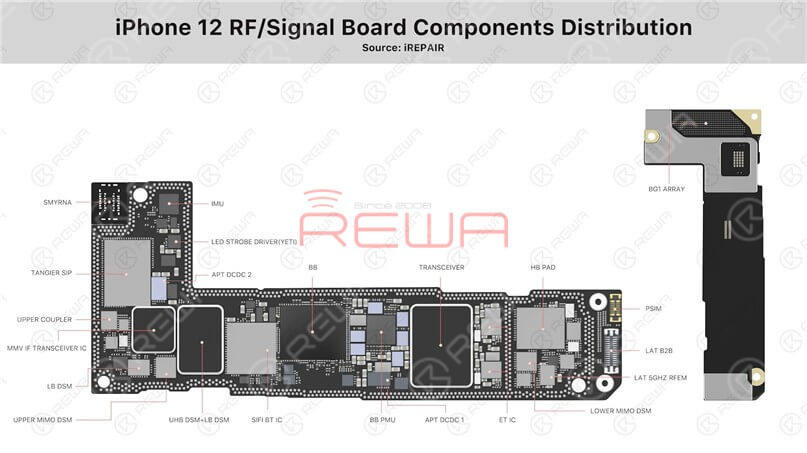 Heat the motherboard with Hot Air Gun at 180℃ and remove the plastic part. 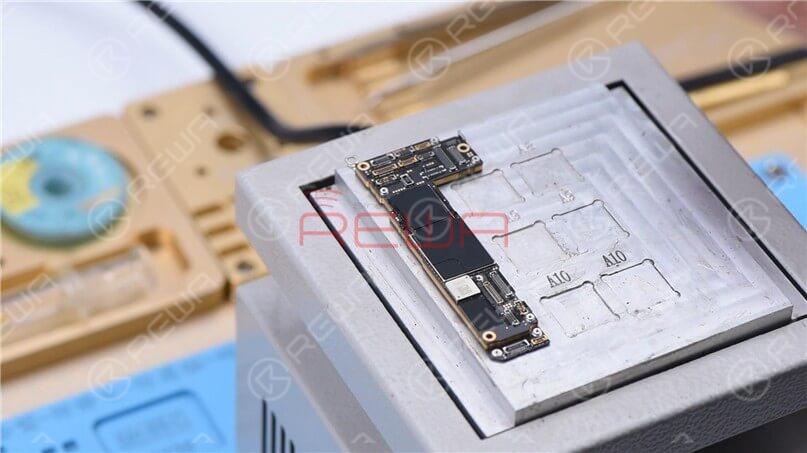 Besides, since the middle layer of the iPhone 12 motherboard uses middle-temperature tin soldering which is different from the low-temperature tin adopted in iPhone 11 Pro, the temperature of the heating platform needs to be adjusted to 200℃. 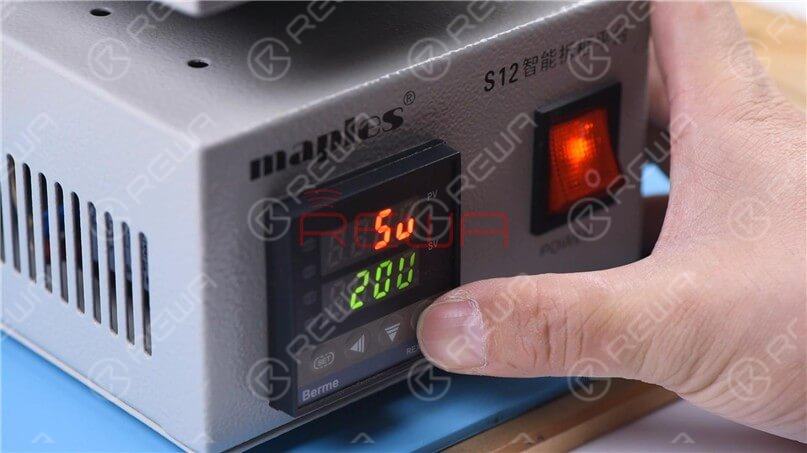 When the temperature reaches 200℃, heat the edge of the motherboard with rotational air (QUICK 861D Hot Air Gun at 320℃). Please be noted that excessive heating may lead to pseudo soldering or falling off of parts. Two rounds of vertical heating are advisable. 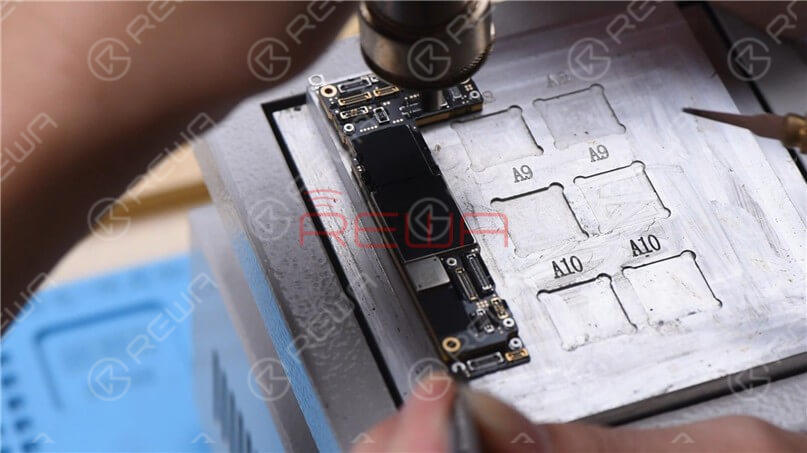 Attach the lower layer to the PCB Holder and remove the thermal grease.

To clean the tin on the bonding pad, smear rosin with Soldering Iron at 400℃ and solder-wick. The middle layer of the motherboard uses middle-temperature tin soldering, which makes it harder to clean than the low-temperature tin. 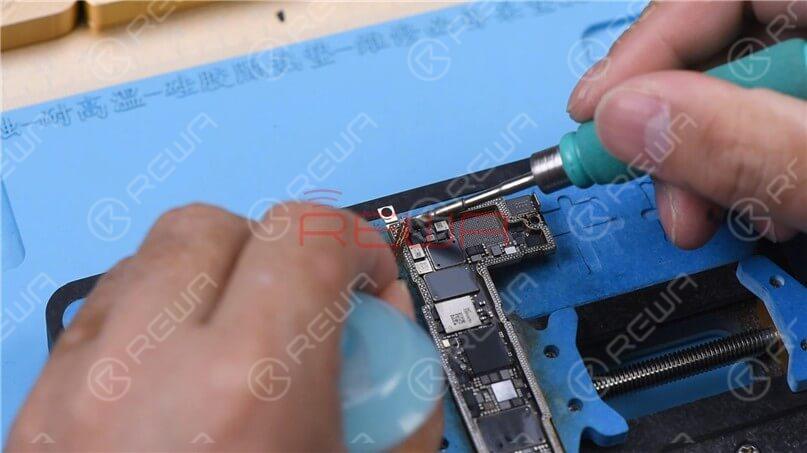 Clean the bonding pad with PCB Cleaner and then handle the upper layer in the same way. 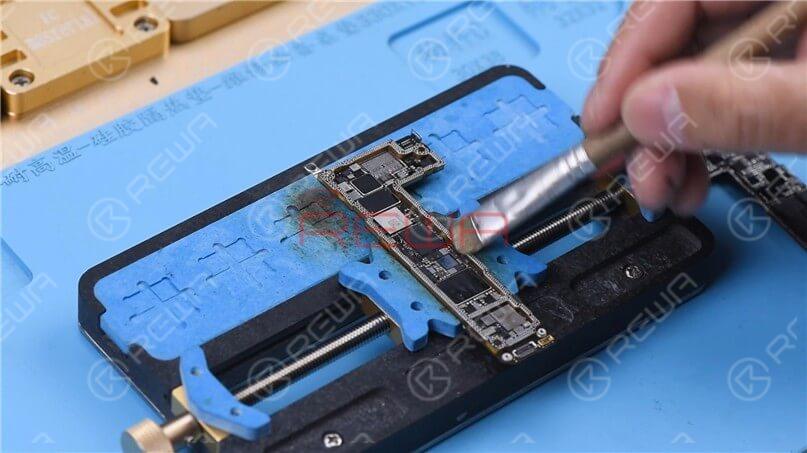 Heat the lower layer with the Heating Platform at 200℃. After the solder ball is formed, turn the power off and cool the motherboard for 5 minutes.

Apply some Paste Flux to the bonding pad evenly. Align the upper layer with the lower layer. After the alignment, keep heating the motherboard at 200℃. To add extra heat, heat along the edge of the motherboard with Hot Air Gun at 320℃. 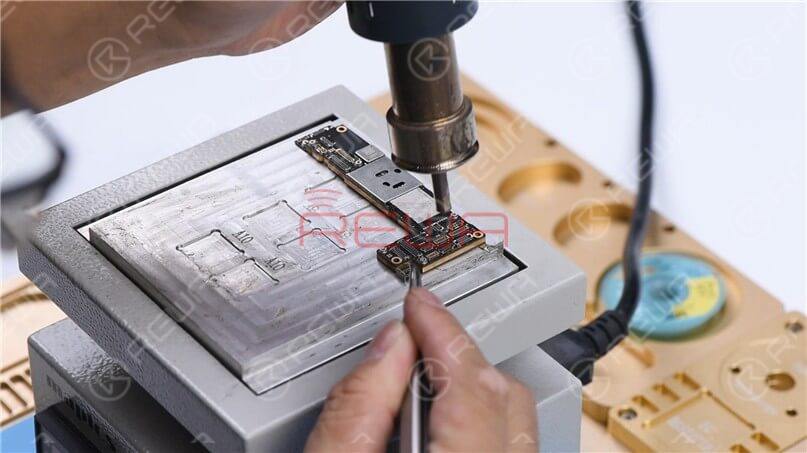 After cooling the motherboard for 5 minutes, put it back on the phone. Boot up and test. The phone turns on normally.

The iPhone 12 in our hand is not a U.S. version. As its 5G network frequency band adopts the Sub-6G, there are primarily three antenna connection seats (upper antenna, NFC antenna, and lower antenna). 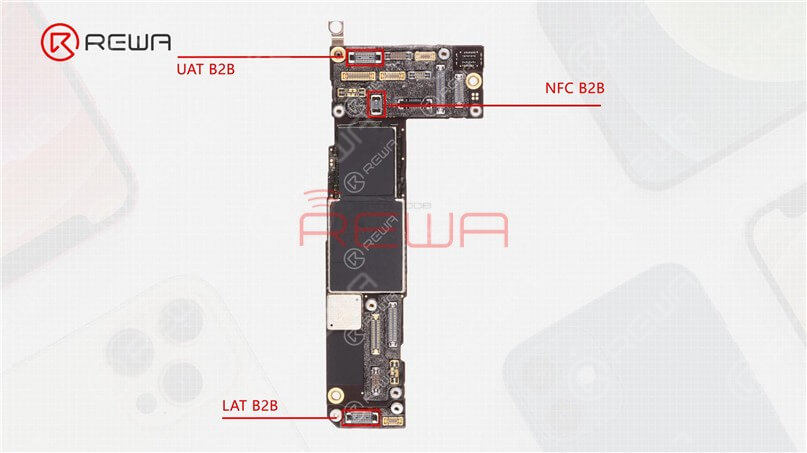 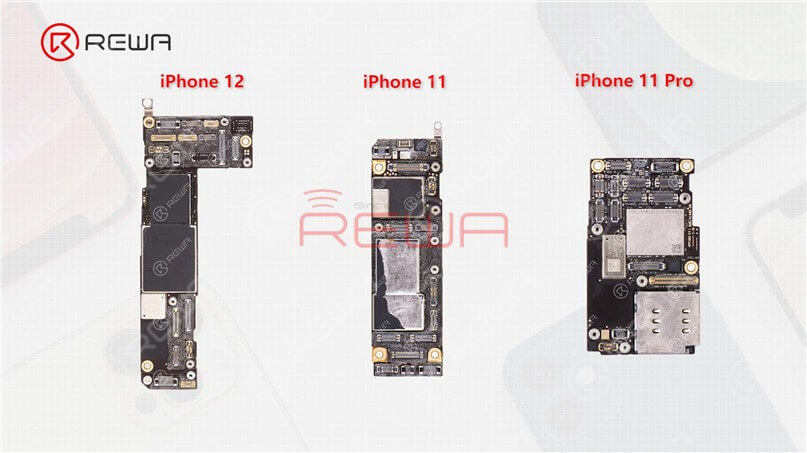 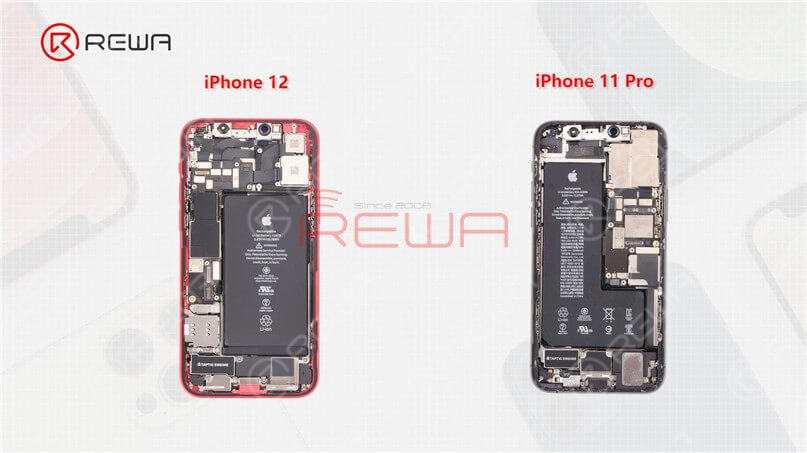 As the new iPhone 12 lineup requires the baseband and chip of 5G to be added to the motherboard, Apple may need to redesign the motherboard and its layout. Next, let’s take a look at the separation of the iPhone 12 sandwich board.

Part 4 Analysis of the motherboard

(1) The upper layer and lower layer of the iPhone 12 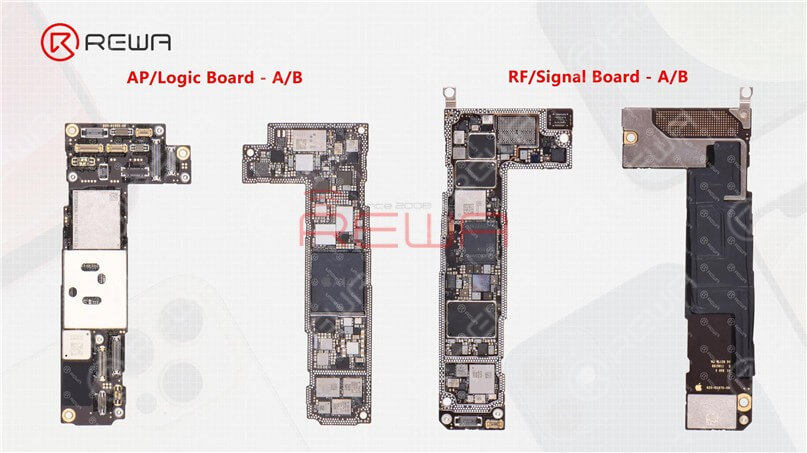 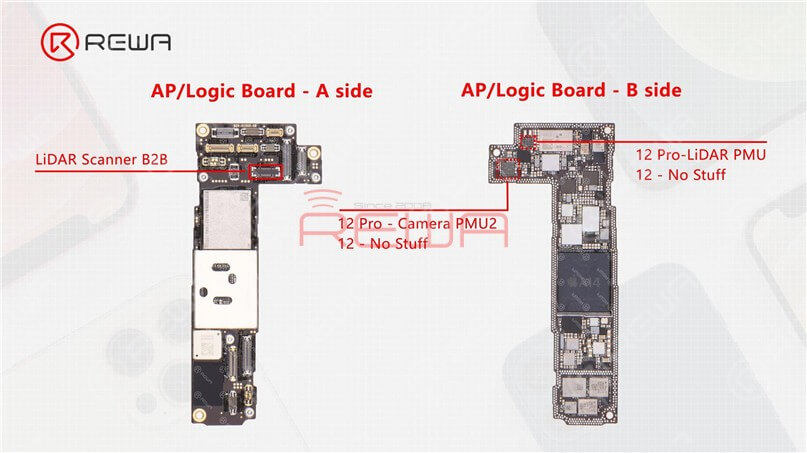 The A14 chip nanometer process, which develops from the A13 chip, goes from 7nm to 5nm. As the first 5-nanometer chip in the industry, A14 Bionic is faster than every other smartphone chip.With A14 Bionic, the CPU, GPU, and machine learning abilities of the iPhone 12 lineup have been improved substantially. 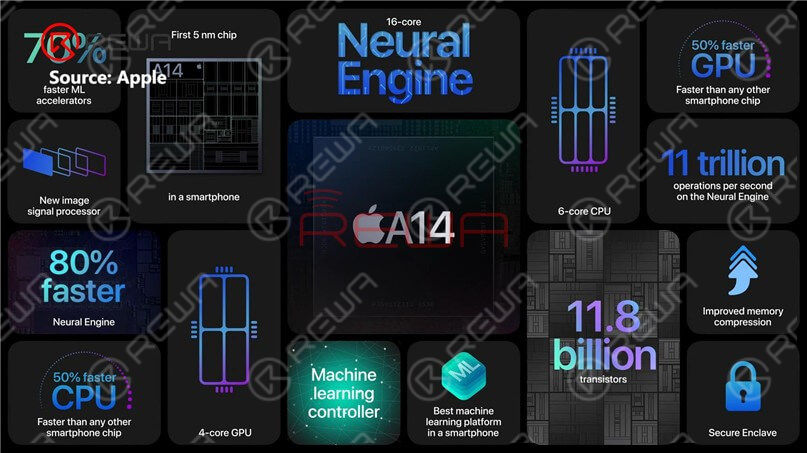 According to Bloomberg, Apple is said to face shortages in power chips for iPhone 12. Power management is more important in the iPhone 12 than for its predecessors given additional camera features and 5G capabilities, increasing Apple’s need for these parts. 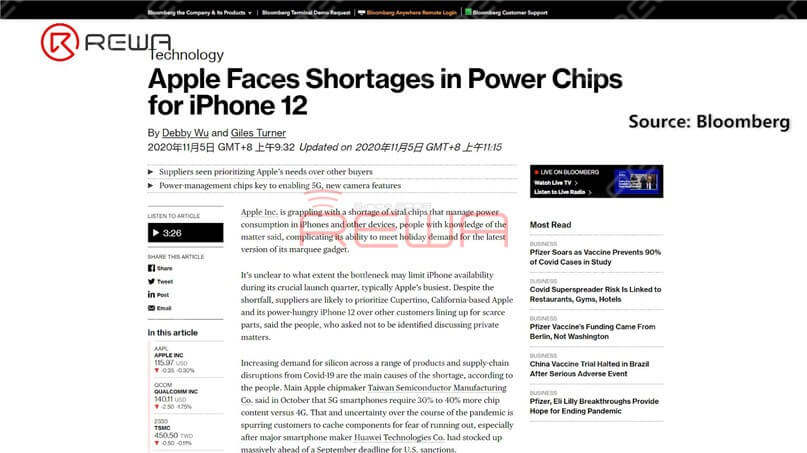 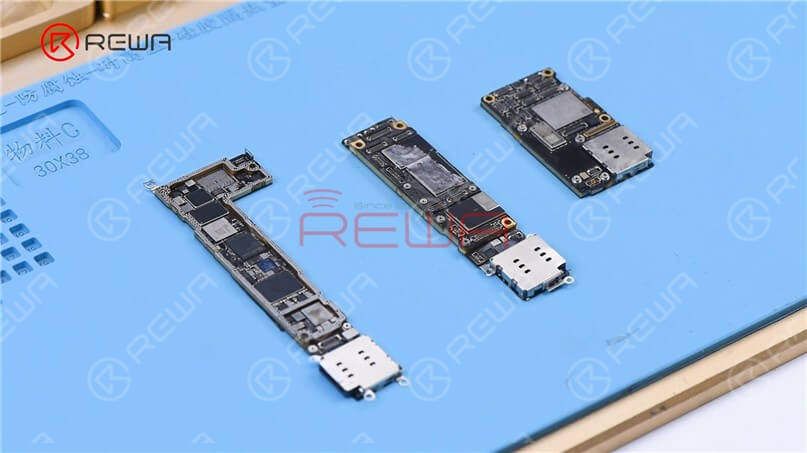 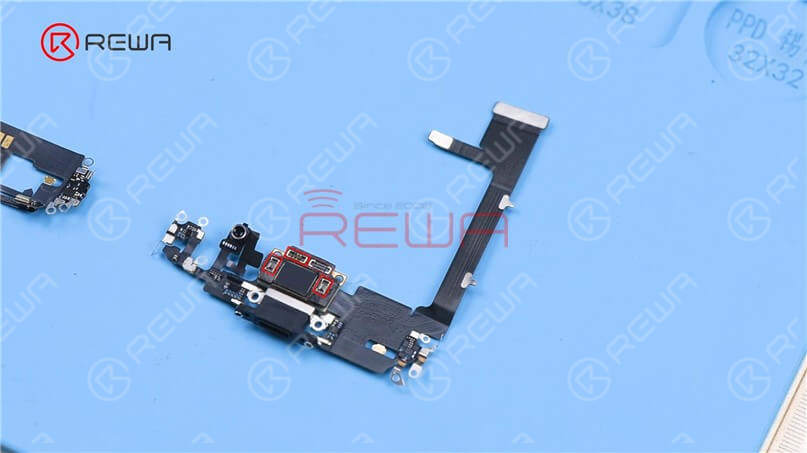 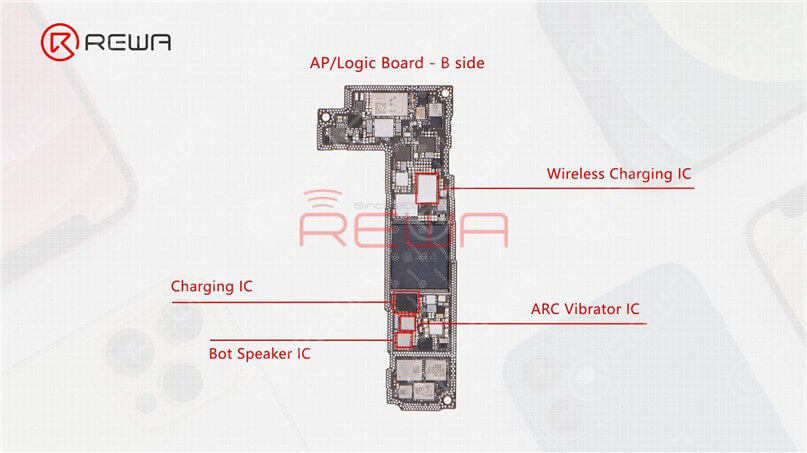 Take the Face ID parts of the iPhone 12 and iPhone 11 Pro to compare. In appearance, the iPhone 12 Face ID front camera module looks much the same as the previous iPhone 11, with some changes to the metal frame and flex cable. The layout of the infrared camera, front camera, and dot projector remains unchanged. It can be seen from the microscope and camera lens that the flood illuminator module at the ear speaker flex cable is different. The lighting area of the iPhone 12 flood illuminator is larger. 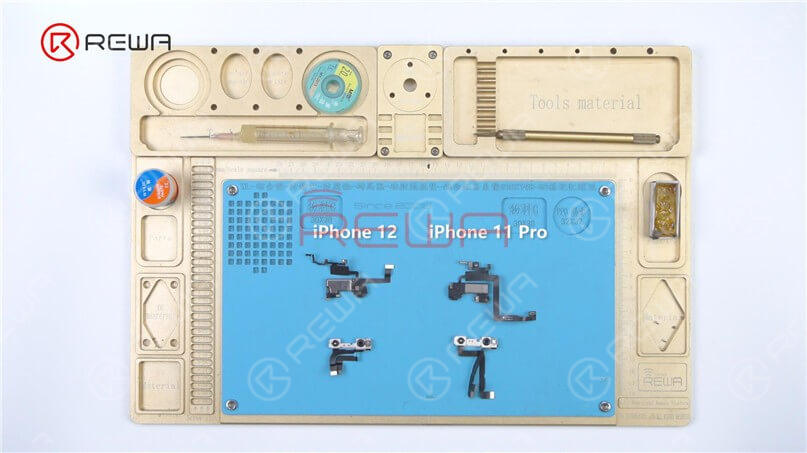 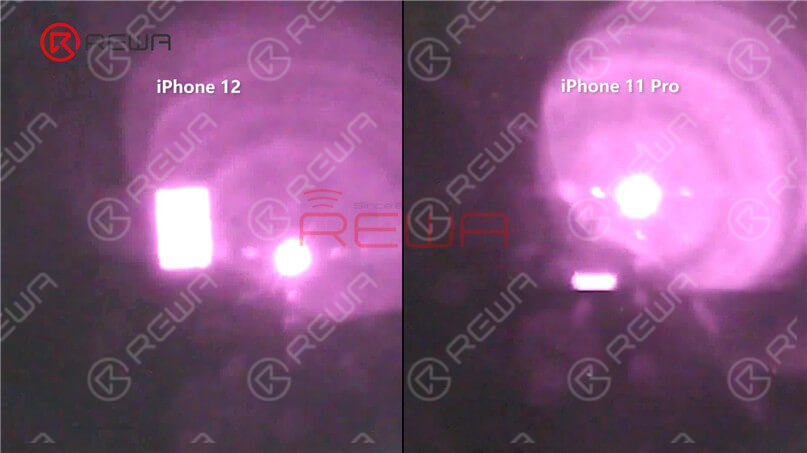 Visit our online shop for repair parts and tools. Be sure to follow our YouTube channel, so you will get the newest repair information. For more detailed separation and recombination techniques of the iPhone 12 motherboard, please watch the video below!