Apple's new iPhone 13 lineup made its debut at the 14th September Apple Event, with four new models shown off. New models with technology upgrade always come with new repair challenges. Today we will disassemble iPhone 13 Pro to see the interior structural changes and how those changes will affect repair.

In the first place, remove the card tray. The card tray is made of metal and features Dual SIM with waterproof and dustproof rubber ring inside.

Besides the adhesive, iPhone also uses the bottom screws to reinforce the fastening. Remove two screws from the bottom.

Heat the phone with Heating Pad for about 3 minutes. Lift the display with a Suction Cup. Insert a Plastic Card when there is a gap. Then slide along the gap. Like iPhone 12 Pro, the display flex cable of iPhone 13 Pro is on the left. So the iPhone 13 Pro display also opens from the right edge. In addition, the flex cable of the sensor module is very short. So when lifting the display,  the angle should not be greater than 90 degrees to avoid breaking the flex cable.

Remove the three screws that hold the sensor flex cable. Heat with Hot Air Gun to remove the flex cable.

The aperture of the ambient light sensor is at the bottom right of the notch.

The flex cable integrates a front microphone, a distance sensor, and an ambient light sensor. It is less of a floodlight illuminator than the iPhone 12 Pro.

The iPhone 13 Pro's dot projector has moved to the middle.

Next, let's take a look at the overall interior structure. iPhone 13 Pro looks much cleaner than iPhone 12 Pro because there is less printing on the battery surface. And there's A15 on the motherboard.

Remove the 5 screws that hold the rear camera shielding cover. Disconnect the flex cable of the camera. Remove the camera. iPhone 13 Pro has a bigger camera than the iPhone 12 Pro.

Detach the LiDAR. All sides of the LiDAR are protected by buffer foam.

The seat of mmWave is empty on the motherboard.

Remove the earpiece. The size has been increased compared with the previous model.

Then we remove the battery.  Use tweezers to slowly pull out the adhesive strips. Battery capacity has increased from 2815 mAh to 3095 mAh. 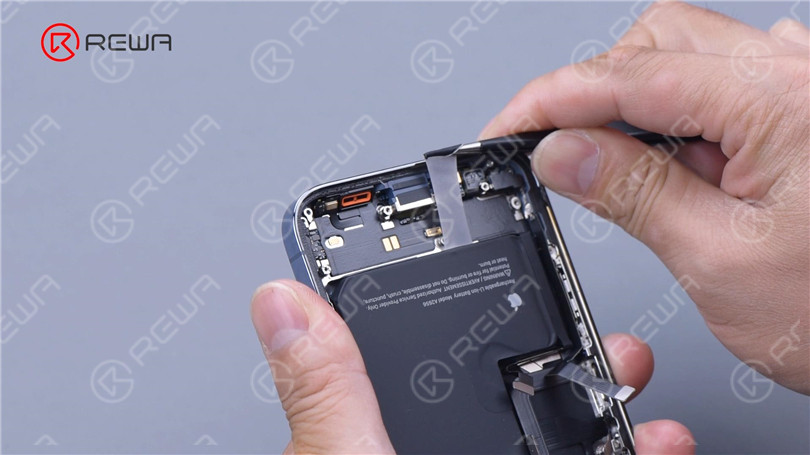 Finally, remove the plastic part and then the charging port flex cable.