Apple announced its iPhone 7 Repair Program for "No Service" Issues last year. And REWA repair technicians have confirmed that the No Service problem is caused by a PCB defect. The general repair thought is to find out the faulty component by ruling out possible causes one by one. However, an experienced repair technician confirms the version of the logic board at the very beginning. Therefore, the faulty component can be located quickly and the repair time saved.

Follow our iPhone 7 No Service due to the shorted baseband CPU repair case today and learn how to locate the faulty component quickly by analyzing the fault at the very beginning to save your time.

Hold the power button to turn on the phone. We can see that the serial number displays normally on the screen while there is no IMEI number on the screen. The phone shows a No Service error in the upper-left corner. Judging by this, the baseband circuit has malfunctioned. Next, we will show you two different repair thoughts on this issue. 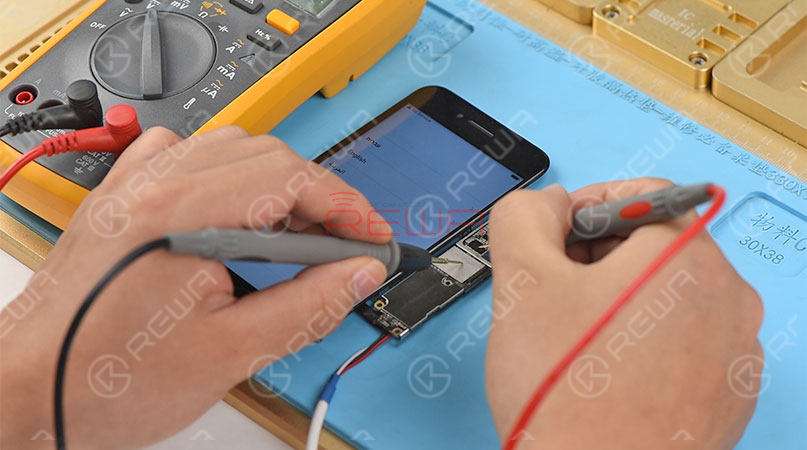 AS the circuit related to C5630 and C5703 consists of the baseband PMU, the baseband CPU and multiple filter capacitors. To find out the faulty component, we need to rule out one by one. Costing technicians 35 minutes or so, steps above end up with an unrepairable result. Which is unworthy for a technician. So next we will introduce you with a new way to locate the defect within 2 minutes according to our REWA experienced technician. So next, we will introduce a new way, which is presented by REWA experienced technicians, to locate the faulty component within 2 minutes. First, confirm the version of the logic board. This is a Qualcomm version logic board. Run diode mode measurement of C5630 or C5703, The measured value is 0, which indicates that the baseband CPU has shorted. In this case, there is no need to proceed with the repair.

Here is the question you may wonder about. "How do you know that the baseband CPU has shorted based on the measured value?" As we mentioned above, Apple announced its iPhone 7 repair program for "No Service" issue last year. And REWA repair technicians have confirmed that the No service problem is caused by a PCB defect. Due to the PCB design defect of iPhone 7 Qualcomm logic board, bonding pads of Pin 93 and Pin 98 of baseband PMU are easy to fall off. Which results in the abnormal voltage and large current folwing outputted from the baseband PMU to the baseband CPU. In this case, there is no need to proceed with the repair. You can just replace the logic board. For details, please visit:

For the tools used in video please go to REWA store to order if you need it.